Trends that could trip you

We're rapidly approaching the moment when every retailer has to have a mobile app to serve his physical spaces. Retailers without a mobile app will be 'disabled' and at a significant disadvantage.

Sailthru: 4 Ways Retailers Use Digital Technology to Improve the Brick‑and‑Mortar Experience, 2019-May by Mike O'Brien

When Sailthru surveyed more than 2,000 American and British consumers, we found that most of them didn’t notice or care about the absence of stores like Sears, Toys”R”Us or House of Fraser. However, we also found that people generally prefer shopping in brick-and-mortar stores. 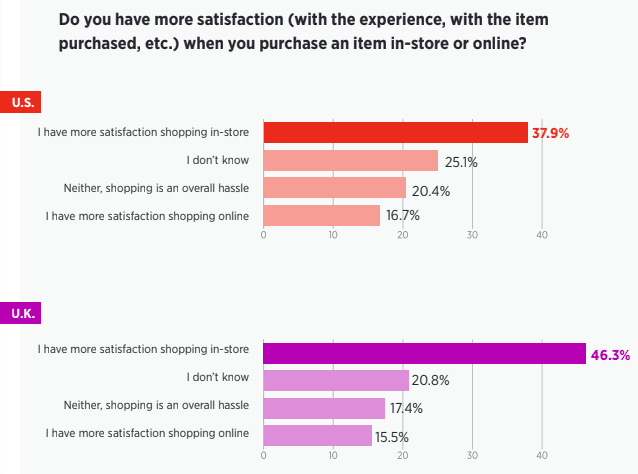 The catch is that consumers favor physical stores that are enhanced by technology. Using digital data to bring personalized customer experiences is challenging, but plenty of retailers are bridging the gap between on- and offline with technology such as beacons, in-store navigation and connected loyalty programs....

Frank And Oak, a smaller men’s retailer, shows how a more human touch can be applied to beacon technologies. When a high-ranking member of the store’s loyalty program walks into a Frank And Oak store, their mobile app, combined with a beacon, alerts a staff member to offer the customer a freshly brewed cup of coffee.

Here is Sailthru's list of retail outlets where we can see these technologies:

Its new loyalty program is rewarding Starbucks, which is becoming a mobile-focused business

For Starbucks, managing growth is becoming a matter of their loyalty program. New stores will continue to be necessary, but profitability will be driven by customers using their mobile app. Not only are those customers rewarded, they are measured, tested and tracked in a way that retailers haven't known before. In the future, rents will still be paid, but managing a successful retail business will be more about a company's ability to leverage mobile-based relationships.

The Motley Fool: How Important Is Starbucks' Loyalty Program?, 2019-May-5 by Daniel B. Kline

The program has grown steadily for two reasons. First, it's tied to the company's app, which has a mobile order and pay function that allows customers to skip the line in stores. Second, it offers real value beyond just the rewards you can earn, including access to events like Happy Hours (discounts for certain drinks on some afternoons), days where you can earn double "stars" (rewards points), and other special offers.

For consumers, it makes sense to join Starbucks Rewards because the app makes it easier to place and receive an order in a timely fashion. CEO Kevin Johnson gave an update on the program's growth during the company's second-quarter earnings call.

"With respect to driving digital relationships, we are pleased with the continued momentum of our Starbucks Rewards program," he said. "In the second quarter, we expanded our active member base by half a million customers, a 13% increase that takes active Rewards membership to 16.8 million."

At the end of last year, Starbucks revamped its loyalty program, moving away from frequency-based rewards to spend-based ones, Group President John Culver said during the call. Since the change, the chain's 90-day active membership has increased 25% year-over year. "We now have 8.3 million active 90-day members, and that is a significant step change in terms of the growth rate from what we've seen previously in the program," Culver stated....

By switching the focus of the loyalty program from frequency of visits to how customers spend, Starbucks is attempting to broaden the appeal of the loyalty program beyond it most loyal customers with the expectation that once consumers become loyalty members, they will visit more regularly to earn rewards. The growth in Starbucks' rewards program also underscores the importance of mobile in helping to solidify its relationships with key customers who are most likely to visit its stores.

Narratives have traditionally been entertainment or history. The call to use them in advertising has had mixed results. We are finding more coaches who are pointing out HOW to design a narrative that works for a commercial message.

One of the most powerful ways to turn prospects into aspiring heroes is to pit them against an antagonist.

Posted at 10:17 AM in Trends that could trip you | Permalink

How things, including organizations, change

I tend to think that organizations won't change unless forced, but 'org designer' Kathryn Maloney reminds us that's actually not true. Managing and leading are more about steering change that instigating it.

Another striking thought below: living systems (including organizations) naturally differentiate themselves. What if that need to differentiate drives a lot of change that seems useless?

The Ready: Change as a Force of Nature, 2017-Feb-27 by Kathryn Maloney

Where change management may apply change to or attempt to manage change within a system, org designers are focused on unlocking capacity and potential within a system. We aim to leverage change as a natural, expected, and needed force. We believe in flow and emergence. We don’t actually believe in control and management....

Data on why your data needs storytelling

When selecting topics for my blog, I prefer to share evidence. But we have to be careful... data doesn't speak for itself. Context is crucial and the best way to provide it is by telling a story--especially a story that makes people feel something.

Memorability: A study by Stanford professor Chip Heath (Made to Stick author) found 63% could remember stories, but only 5% could remember a single statistic. While 2.5 statistics were used on average in the exercise and only 10% of the participants incorporated a story, the stories are what caught people’s attention.

Persuasiveness: In another study, researchers tested two variations of a brochure for the Save the Children charity organization. The story-based version outperformed the infographic version by $2.38 to $1.14 in terms of per participant donations. Various statistics on the plight of African children were far less persuasive than the story of Rokia, a seven-year-old from Mali, Africa.

Engagement: Researchers also discovered people enter into a trance-like state, where they drop their intellectual guard and are less critical and skeptical. Rather than nitpicking over the details, the audience wants to see where the story leads them. As mathematician John Allen Paulos observed, “In listening to stories we tend to suspend disbelief in order to be entertained, whereas in evaluating statistics we generally have an opposite inclination to suspend belief in order not to be beguiled.”

The dark side of creativity

The Conversation: The dark side of creativity, 2014-Dec-11 by Lynne Vincent

while individuals who self-identify as creative may feel more entitled, it’s possible that this entitlement will cause them to take creative risks

Biggest mistake we make with social media: going for the Like

When we treat social media as if they are publicity tools, we undermine ourselves. Our posts ought to direct people how to participate in a dialogue that leads to co-operative action.

Over at The Bloggess, Jenny is founding a new religion, Blogessianism, as part of her ongoing effort to get everyone to take the world lightly. Extra gravy for all. Remember, "You may decline on the gravy, or give your gravy as a charitable contribution to those less gravied." Now make your own title and spread the word.

...social isn’t about pushing a message out to potential customers, its about pulling people into a movement.