How email newsletters are evolving

Signing up for an email newsletter used to be a risky business, but two things have dramatically lowered the risk.

Here's a good recap of what's happening with publisher newsletters, from NiemanLab: Here's how to build a better newsletter.

And here are some really cool newsletters for you to browse:

I'm assuming that you already know about theSkimm, NextDraft, and Quartz. These allow me to put the news in perspective and keep up with all the new memes.

I just realized that I don't have enough beauty in my inbox, so I just signed up for the National Geographic newsletter. I'll let you know how that goes.

How to live with anxiety and not be ruled by it

Reading this article made me remember that I've lately been filling the 'liminal space' in unproductive ways. Playing with my iPhone helps me avoid worrying but using the time to observe and release my anxieties is much more productive.

Thanks to meditation, I better understood that anxiety was a common reaction to the uncertainty of human life. On its face, human life is uncertain. We’re here but don’t know why or for how long, and we never really know what is going to happen next. Of course we’re anxious. That anxiety easily inspires the dark, disoriented sense that life is too difficult and maybe I shouldn't be here at all. Or, as one of my friends recently put it to me, “Oh, we all got that.” And, we all have the opposite response that I’m the most important person alive and doing it better than those people over there. Generally speaking, our anxious hot boredom reaction to life’s uncertainty is the grand project of me—developing habitual strategies to either prove our worthiness or affirm our unworthiness. We often run parallel tracks working self-promotion and self-destruction simultaneously—hence our relentless outward displays of achievement, acquisition and awesomeness coupled with secret, shadowy stuff around food, intoxicants, sex, internet, etc. I’m the best and I’m the worst are two sides of the same confused ego coin.

Unexpected signs of sanity in the universe: staff of Know Your Meme on The Verge

Lately, I've been reading many things written by technologists who think the internet has gone off the rails, and maybe (they think out loud), we should do something about it. Most notably, Dan Hon's No one's coming. It's up to us.

This article published on The Verge gave me hope because I didn't expect the staff of KnowYourMeme.com to care. They haven't found a solution but they are working on it, realizing that it's going to be a matter of each of us taking responsibility for the unintended consequences of what we do.

'Unlearning.' Yes, that's what we need.

The Verge article focuses on the site's editor-in-chief, Brad Kim, but includes interviews with several staff members and founders. I highly recommend reading the whole thing.

Posted at 10:19 AM in Living in trouble | Permalink

How Hyatt, Starbucks, and Domino's layer their loyalty programs for a rich customer experience

Here's the BEST article we've found about the evolving landscape of loyalty. It's short, includes valuable examples, and summarizes HOW we can build a first-class loyalty system without confusing our customers.

Retail Touch Points: A New Approach To Brand Loyalty: How To Stand Out In The Experience Age, 2018-Mar-9 by Katherine Parsons and Darren McColi of SapientRazorfish

But what is “real loyalty” and how can a brand tailor programming to catalyze it? Following our extensive proprietary research, we explored the context behind why and how the approach to loyalty is shifting, analyzing brands on the forefront of loyalty programs that garner results and distilling our findings into actionable suggestions for brands to incorporate into their own strategies....

Much of Hyatt’s earn/burn model is tablestakes for the category: earn points for staying within their network/partners and redeem points for discounts/free nights, etc. However, we see a slight shift in the mechanics of the program that nods to approaching loyalty more broadly. The very notion of Hyatt’s “World of Understanding” campaign seemingly speaks to the shift we need to make, from loyalty living within organizations’ programs or departments to understanding the customer and seamlessly and naturally fitting into his or her world....

Domino’s rewards the spending behavior they want to encourage by giving loyalty members a free pizza for every six digital orders placed totaling $10 or more. Loyalty members also are rewarded based on engagement—those who spread their love for Domino’s on social media are eligible for up to $10,000 each in store profits!

Based on their recommendations, here are the guidelines for developing a loyalty system in our businesses.

Last month Colleen DeCourcy, chief creative officer of ad agency Wieden+Kennedy, gave a presentation about building 21st-century brands to the Interactive Advertising Bureau. The title is "Welcome to Optimism: Brand Building in a Post-Advertising World." This idea that all the rules have changed is a familiar theme for any industry that's evolving quickly.

I have always been fascinated by the process and results of innovation. I'm not sure innovation is something we can actually manage. Often we seem to be barely holding on for the ride. I do think that DeCourcy and W+K have put together a point of view that rings true, and their expression of these ideas in impeccable.

"Size [of the company] is no longer your friend. It's hampering reinvention to match the shape of the market."

Think about that in context of Facebook. Then she says...

"Any move that isn't in the direction of nimbleness, emotional intelligence, transparency and collaboration, is building in the wrong direction."

If true, it would mean that the Zuckerberg approach, which is to manage the use of Facebook from the top down, with little transparency, is pretty hopeless.

"What we have learned is that to build anything on top of what we have now is a fool's errand."

The speech contained many more fascinating ideas, and I recommend a quick read.

Disruptive innovation is one of the most misunderstood concepts in modern business. It's rooted in just one thing: more people having access to tools that used to be available only to people with lots of money or skill.... This one thing is the biggest thing we need to remind ourselves of every day.

More delivery, less friction.
That's the challenge we ALL have in front of us in the 21st century.

Fear is the enemy of innovation.
I try to practice non-attachment. We all should.

data is a form of empathy (their boldface, not mine)

The one big learning? You gotta be willing to break your process.

The creation of a community that works in concert with the brand gives the whole endeavor a larger purpose in society. That matters. 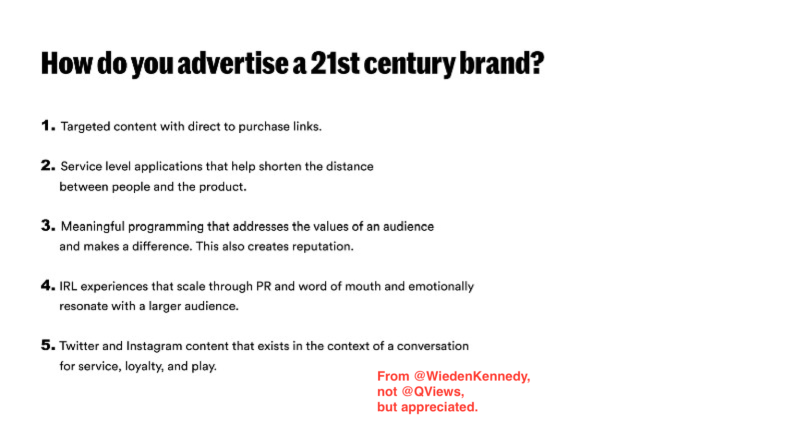 At the Houston Chronicle and other newspapers, recognition has grown that subscription growth is underpinned by "reader loyalty." Reader loyalty is different from customer loyalty (which would traditionally be measured by subscription renewals). Reader loyalty reflects higher usage of the publisher's site, and it's often connected to email newsletters. Finally, we are starting to see content being tuned to the loyal reader, instead of traffic. Whether or not this leads to greater profitability for local newspapers... remains to be seen.

Digiday: In an era of loyalty, newspaper publishers focus on time spent and frequency, 2018-Feb-19 by Max Willens

At Hearst Newspapers’ two largest ad-supported sites, SF Gate and Chron.com, the focus has shifted from unique visitors to growing the share of readers that visit at least 10 times per month. As of last summer, The Boston Globe now pays more attention to what kinds of stories convert subscribers and what that subscriber base reads, rather than focusing solely on top-line audience size....

At the Seattle Times, the pageview retains some importance for the ad side, but the newsroom is more focused on tying the activity to the outcome, said Sharon Chan, vp of innovation, product and development at the Seattle Times. Local politics and sports have driven the strong conversions in the past, so in spring 2017, editors worked with consumer marketing and ran tests – putting more content on the homepage, upping the frequency of their posts, adding or subtracting video – to figure out which increased subscriber conversion rates.

The Times recently updated an internal dashboard that shows which articles lead to the most digital subscription conversions. Now, the entire newsroom can access its contents, and the paper’s editors are encouraged to take responsibility for driving conversions with their coverage. The dashboard is the Times’s latest step in a major push to grow digital subscriptions, which increased 55 percent in 2017 to over 33,000.

Last summer, the Hearst-owned SF Gate, an ad-supported complement to the San Francisco Chronicle’s paywalled site, began focusing less on pageviews than on growing the share of readers that visited the site 10 times per month because those people are 25 times more likely to become a subscriber than someone who doesn’t, Hearst Newspapers’ president of digital Rob Barrett said. Growing loyal readership also drove more pageviews overall.

Twenty-First Digital founder Chowning said prioritizing loyalty has moved local publishers away from national news content that’s likely to get a lot of reach on Facebook and more toward content that clearly articulates the publisher’s value. The Seattle Times, for example, has concluded that it takes 25 times more visits from Facebook to convert a reader than it does to convert a reader visiting their site via its newsletters. “We’re not going to get away from Facebook,” Chan said. “But we want to do things smartly.”

The new paywall replaces a system where editors chose which content was paywalled and which wasn’t. Under the new system, first-time readers can consume as much content as they want, and the amount they consume dictates when they hit the paywall and if or when they are shown a subscription offer.

“The whole approach is: ‘I want to win your trust,’” said Esfand Pourmand, svp of revenue at Hearst Newspapers Digital.

The subscription offers that engaged readers receive will be framed differently (though the cost will be identical). For example, sports fans might get an offer oriented around staying up to date on a team they follow, while the out-of-towner would get one telling them that a subscription will keep them connected to the goings-on of the market. The audience segments, which the papers also use for lead-generation campaigns designed to grow newsletter subscribers, are revised on a monthly basis, based on how much content a paper’s readers have consumed.