The Harvey and I

Friday afternoon is the right time to write this post, although I suspect I shouldn't publish for a few days...

I'm embarrassed about the fact that Harvey was a major inconvenience in my life. Not a tragedy. Not a detour. Not a sacrifice.

Our family suffered no losses during/after Harvey except the ability to show up to our jobs and earn more money. (Except for my son, who has managed to hold onto a traditional salaried job, which he resigned right before Harvey but, considering, they ask him to continue for a few more weeks.) The rest of us are contractors. No work--no pay. However, we have not been damaged. We had savings.

The thousands of people in Houston who live paycheck-to-paycheck were not so lucky. If they did NOT lose their homes, they still may lose their homes because they can't pay their mortgage because they can't work. And it's even worse for renters, who have to honor their lease even if the place is miserable. (If they can convince someone it's 'unliveable' they can get their lease canceled... if and when!)

I have Survivor's Guilt.

I also feel guilty because I'm NOT one of those people who went out in boats or formed a new rescue initiative or showed up at the shelter and rekindled hope or anything. I just stayed out of the way. Because in the past, when I went to help... I just felt out of place. Never did it look like I could make a difference.

For the record: I sent thousands of dollars. And I will send more.

Hurricane Harvey caused me major anxiety because my mother's house was vulnerable. She has Alzheimer's and I was told to get flood insurance for her 4 months ago, and last month I finally got around to it, but it didn't go into effect until Sept. 15, so I spend the whole time anticipating that I was going to be punished with thousands of dollars of damage to the home she loves, her refuge, where she and my brother live.

Probably the reason that my mother's home avoided damage is that my brother, who lives with her, is the kind of person who woke up in the middle of the night on Saturday, realized it had been raining hard for hours, jumped out of bed, grabbed a shovel, and headed out to the street to make sure the storm sewers were working. When he got there he saw many other people in the street, poking into the storm sewer openings and making sure they worked. No one on that street was flooded. Luck played a big part but vigilance made a difference, too.

Hurricanes are complicated. Insurance and vigilance can help, but sometimes they make no difference at all. It can be very cruel. For one of my friends, Harvey was their third instance of water in the house. He and his wife have decided to be home owners no more. I don't blame them.

Writing about Hurricane Harvey has made me feel better. I hope I can make you see that a hurricane is not a weather event. It's a life event that is different for each person who experiences it. I hope your experience was bearable. 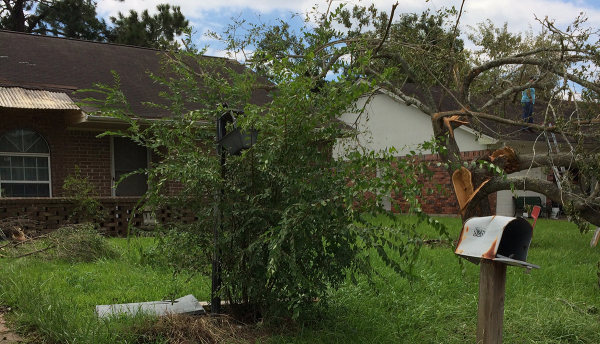