Collecting information about customers has gotten easier than ever, but much of what's collected is just easy-to-get and not easy-to-use. Keeping data clean and useable is expensive and you better know why you're maintaining it.

In this case, I was going to buy cereal and milk anyway, regardless of the accuracy of the prediction. Although my customer experience is probably improved, I do not necessarily buy more stuff. If the aim is to increase sales, the metric should, for example, focus on how well the model can predict and recommend products that will nudge me to buy much more than just cereal and milk.

Posted at 08:36 AM in How to market systematically | Permalink | Comments (0)

Unpacking the 'kill email' trend: It's not about CRM.

With Slack all over the news, the death of email is being trumpeted again, but the more you read the more you realize Slack, Asana, and Convo are targeting intra-company email, not the inter-company email flow which is tracked by CRM applications. For the development of business relationships between customers and suppliers, email will still be important. Capturing the the flow of social messages such as LinkedIn updates continues to be the real challenge for CRM.

These dedicated apps [Slack, etc.] enable users to win their time back by providing all the context users need to act upon the email. ...because it enables filtering, categorization and smart reminders.

At this point in email's unbundling, the volume of email in our business inboxes hasn't declined, and it may never decline because most of the automation is on the outbound side, making it easier and easier to send larger volumes of email. When both sender and receiver have intelligent workflow apps or are trained to log into workflow apps first, the most effective way of reminding users to return to workflow won't be email reminders or push messages. And then, perhaps email volumes will fall.

But, even if email volumes don't decline, workflow-based email products will enable us to process much larger volumes of email than we are today. 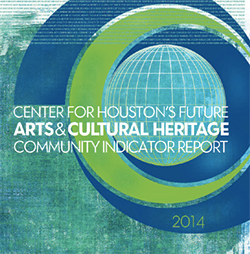 This morning I attended a meeting hosted by the Center for Houston's Future encouraging input for the upcoming Cultural Plan being written for the city. The Arts & Cultural Heritage Indicator Report from the Center was distributed.

Most of the people attending were arts organizers rather than just artists or citizens. These were the people with the most at stake in the Cultural Plan which will be written over the coming year.

As long as I've been following Houston's struggle to develop as a major art center and to change its image as an energy-focused center of commerce, most of the ideas proposed were very familiar.

1) The cost of working for artists in Houston has been going up to the level where Los Angeles and Brooklyn seem just as affordable places. This news came from Joseph Havel, Director of the Glassell School of Art and one of our leading educator of artists launching their careers.

2) Suburban demand for arts organizations is surging, as well as a desire for higher visibility for their cultural institutions.

The desire for a better art market in Houston, with higher prices being offered for locally produced work, and more opportunities for selling work also resonated.

We also discussed whether the art market in Houston is depressed by a desire to avoid exceptionalism, a fear of singling out high talent and maybe snubbing other hardworking and popular artists. If we do want to keep artists in Houston (and I'm not sure we do), then we have to let their prices rise to the international level.

Creativity not the purpose but leads to meaning

In the fall of 1995, Fast Company magazine arrived in my mailbox with the cover that said, "Work is personal. Computing is Social. Knowledge is Power. Break the Rules."

It was a breakthrough moment for me, frustrated by my corporate career and trying to figure out how to make work more meaningful.

For me, work is personal expression. My purpose is to pull personal relationships into the front of business. I couldn't have figured that out without releasing my creativity. And it will take every ounce of creativity I have to realize my purpose.

Creative expression opens the door to the inner world of our imaginations. It is here that we make meaning of our lives. It is here that motivation takes root. The more creative we are, the more capacity we have to imagine what's possible and make those visions real....

All life is interconnected and full of purpose. There is, as teacher and philosopher Parker Palmer says, a hidden wholeness in each of us waiting to emerge. Discovering our unique purpose is one of the great adventures of life.

Are you a freelancer or a business owner?

Basecamp is a more fully developed platform than its little brother, Highrise. Everyone knows that. Highrise is built to be a convenient way to keep track of contacts. Features for 'deals and cases' do not add up to a true customer relationship management system.

If you love your customers more than your code (or other creative output), you need to leave Highrise. The excerpt below, from their help pages, shows that keeping up with customers is a secondary activity. If you're a business owner, it's primary.

Highrise HQ: Why aren't my emails to Highrise working?

If your emails aren’t making it to Highrise, the cause is usually one of the following: