As a writer, I have to keep reminding my self that pictures are content in their own right. I don't happen to think visually, but I'm probably in the minority. So I try to be nice to my readers from time to time. 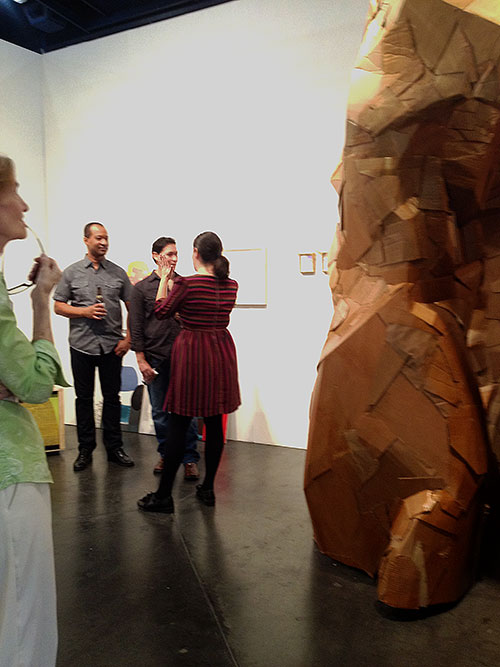 Probably nothing groundbreaking to any of you: people on Facebook really like pictures (and videos). Duh. Where my crazy mind wanders, is here: what would happen if, instead of your marketing department or even your social media team, you let your designers run your Facebook page?

For many of us, updating the resume is a ritual of humiliation.

We look back a history of jobs and remember how they ended. Even if we stepped out at the height of success, we remember our hopes--the things we couldn't accomplish. Maybe there's a way we could expunge those ghosts. Guha suggests the process of writing a reverse resume, then studying it to understand where our wisdom was born.

MENG: Being Honest with Ourselves Makes for Success, 2012-Jan-18, by Richard Guha

Perhaps it would be an interesting exercise to write a “reverse resume,” listing all our failures instead of our accomplishments. Perhaps it would not be something we would want to share with a prospective employer, but it would be a tremendous learning experience.

A Working Future based on a Community of Work

Dave Logan makes a compelling argument that the health of a company depends both on the future as communicated by its CEO, and on the CEO's commitment to realizing the performance required to realize that future.

I don't disagree with him, but I don't think it's the only way a company can flourish.

Speaking from the middle, I see companies that survive bad CEO's through the good judgement and mature behavior of their professionals and front-line managers. These are the people who care for the customers and the other employees. They would like to work for inspired leadership, but they'll accept a civilized place of employment.

Once a sufficient number of well-meaning employees exist to support each other, they can usually work out a future. And such companies are easier to find than the high flyers. I think many young professionals long for meaning the way I did when I started out, and look for it in a grand future, while neglecting the meaningful community at hand.

If companies are going to change and reinvent themselves, then they need to follow a path that will necessarily involve new futures, as they also raise performance standards. ... It is possible to focus on the new future and production issues at the same time. In fact, doing so is far more effective than to focus on one without considering the other.

How to start the ball rolling toward group behavior change

Business-to-business marketing is always about changing the behavior of several people at once.

Getting a champion is great, but at some point, you have to precipitate a larger movement through the company. The legal and purchasing departments have to get on board. You have to arm your champion with the tools to realize big change. One helpful approach is to study social movements.

Only Dead Fish [swim with the current]: How Movements Happen, 2012-Sep-26, by Neil Perkin

Societal movements, he says, "rely on social patterns that begin as the habits of friendship, grow through the habits of communities, and are sustained by new habits that change participants' sense of self."

Posted at 02:46 PM in How to market systematically | Permalink | Comments (0)

Is there any coherence in your networking?

Meeting new people and keeping track of them is exhausting to me. I do like most of the people I meet and I think it's worthwhile to know them. Sometimes they turn out to be people I enjoy hanging out with. (Amazing, I know.)

For quite a while now, I've been practicing 'coherence' when I network, which means that when I meet people, I try to figure out a common goal we have so that I know what to talk about when I reconnect with them. That goal might be as simple as enjoying movies together. So when you ask to connect with me, you better be able to communicate some interests at the time.

Rather than building clusters of individuals merely “doing their part,” Edison’s laboratories fostered collaborative teams that were coherent — a term drawn from the realm of physics.  Coherent teams exhibit the following qualities:

Rather than dedicating his collaboration teams merely to tasks or information gathering, Edison positioned collaboration as a process of discovery learning and creating collective intelligence.  He organized his teams to navigate complexity and drive new knowledge — not just respond to what already existed.

I have a print of this Hugh MacLeod cube grenade on my office wall, but sometimes I have a really hard time starting a conversation with my prospects. Now I find that Noah Brier has developed a good system for creating what he calls an Interest Graph for brands. If you share my frustration and lack of funds, he describes a DIY model in this video.

Percolate: The Interest Graph for Brands, 2012-Sep-4 by Noah Brier

We’ve been talking a lot about interest graphs for awhile around Percolate. Two weeks ago I was invited to speak on the topic at the Media Evolution Conference in Malmo, Sweden. The folks there were kind enough to post the video. Here it is.

Posted at 08:19 AM in How to market systematically | Permalink | Comments (0)

David Weinberger just came back from the Future of Story Telling conference wondering if we are falling into rut of telling stories to smooth over complexity and just give people the answers they want to hear. Yes and no (naturally). If your goal is applause, it's easier to tell a story that confirms people's expectations. They don't grow, but they're happy. Getting people to listen to a story that opens up their mind is a LOT harder. And riskier.

In my head, I go over and over my past, trying to figure out what I've done wrong so I can stop doing it. But in real life, most outcomes were dictated by forces beyond my control. But that doesn't lessen my desire for an explanation, especially one I could use to change my future. We evolved to be sense-making animals, and we'll grasp at the simplest, easiest-to-swallow cause-and-effect explanation we can find. Even if it's wrong.

So I guess the answer would be: don't be evil and tell stories that help people deceive themselves. And don't swallow every story you hear. Even if you told it to yourself.

Joho the Blog: Skepticism about stories, 2012-Oct-8, by David Weinberger

It may well be that stories need to be relatively simple and arced in the middle simply to be stories. And I would hate to lose the stories that come from artists, for great stories — or perhaps I should say truthful stories — transcend the simplicity the form imposes. But I continue to worry that story-telling outside of the aesthetic realm is a simplification that all too often falsifies. So, I wouldn’t want to give up stories. But I would be happier if we approached the form itself with a fundamental wariness.