Small retailers have long relied on strong customer relationships. The internet has added an important new dimension. Retailers now have to web-based user experience as well as in-store customer experience. It's challenging to keep up, but now we have a bigger bag of tools for staying connected with our customers.

“A customer whipped out her phone and asked me if I could price match a pair of Swedish Hasbeen clogs with Amazon,” said Ms. Mautz, who did not match Amazon’s price (the customer bought them from her anyway). “It makes me feel like what I need to do is become more specialized, find smaller, newer lines, and get more things that no one else has.”

Alec Stuart, an owner of Stuart & Wright in Fort Greene, Brooklyn, does not compare his store to larger competitors. “Being such a small business, there’s only a small staff and when everyone is really invested, it translates,” he said.

Gaming our way into reconnection

Not being someone who plays games except to make someone else happy, I usually roll my eyes when they talk about the 'gamification' of marketing.

The article below caught my eye because I worry about "museum legs" and people getting turned off by museum exhibits that are oversized, like a supersized meal. If curators thought more about pleasure, we might have more meaningful experiences at the museum. If museums are interested in that sort of thing, which I have come to doubt.

But back to marketing... Staying in contact with your customers can be boring and repetitive. For the marketer and the marketee, too. We're working on a fun little quiz at MosquitoZone, to be included in our monthly email. Can you reward your contacts with a little fun more often?

Only by rigorously attempting to understand and design for individual contexts can we create systems, interfaces, stories, and you-name-it that not only satisfy a player’s or group’s expectations based on their motivations and identity but increase the probability that she, he, or they will enjoy a rewarding experience time and again.

Last week of the "mix" show at Goldesberry Gallery

The current show at the Goldesberry Gallery is so much fun. I had to snap a few pictures during the last week. Artists are Jessica Kreutter, Rachelle Vasquez, Nathan Dube, Melissa Walter and John Zimmerman. You can see them in person at 2625 Colquitt in the Upper Kirby District of Houston, through Saturday, August 11. 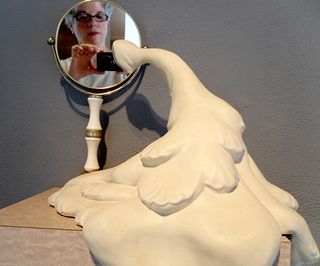 Will you recognize your next great customer?

Hal Brierly, one of the inventors of the frequent flyer loyalty system, is annoyed. Despite paying $25,000 for a ticket (?!), he was treated like a second-class passenger.

Now that experience was comparative. He was sitting in first class, but people around him, who were members of the airline's loyalty program, got more perks. (Damn straight, I hear some of you say.)

In fairness, Brierly's article in HBR is more insightful than I've implied. What I really appreciate is that he's touched on the push-pull of the loyalty program. You have to favor the long-time customer while welcoming the new customer. No easy answers. Loyalty programs have to evolve in meaningful ways.

Airline rewards are still based on miles flown. This is a mistake. The cadence is too slow. Airline programs were designed to reward high-mileage travelers by offering them loyalty perks next year for miles traveled this year. Today retail industry programs reward members who shop this month with rewards next month, measurably driving store visits. One such program has shown that reward redemption can increase profits by $100 million.

How to travel with your prospects

In general, businesses have to push back constantly against the tendency to be focused on a transaction.

The job of managers is to make sure every transaction occurs for the right reason and supports better and more sustainable transactions.

You need to recognize that the B2B buying process is not one big decision; it is a series of micro-decisions. And the company that wins the business is the company that is there to answer those questions and provide fresh insights that influence how the buyers think about the problem so that the buyers can confidently advance their journey.

Posted at 08:53 AM in How to market systematically | Permalink | Comments (0)

Cherish the customers that speak up

Social media can seem like such a hassle, but having an entirely new communication channel means new opportunities to learn from your customers. Listening may be more important than talking.

The Hub Magazine: Check, please!, 2012-Jul/Aug, by Spencer Hapoienu of Insight out of Chaos

American Express recently released its 2012 Global Customer Service Barometer. It found that consumers who use social media for customer service are significantly more valuable than the general population. According to the report, socially engaged customers are almost twice as willing to spend more for excellent service than the general population. They are also nearly three times as likely to communicate positive customer-service experiences.

That’s the good news. These customers need attention because they are also more than 50 percent more likely to cancel an intended purchase because of poor customer service than the general population. They are over twice as willing to share negative customer-service experiences, as well.

Newer
Theresa has been writing the QViews blog, her perspective on marketing, Houston, organizations, and innovation for fifteen years.
Subscribe to this blog's feed