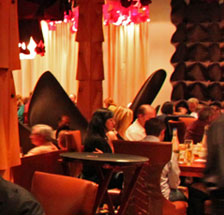 At Happy Hour this evening I'm going to Americas River Oaks to toast Michael Cordua for being a sponsor of the Houston Summit. I'd love to see you there. Map.

The right way to build on others' creations

You may think you're an original but you're wrong. You may have labored long and hard to realize an idea, but 'nothing comes from nothing.' Claiming sole credit will never win you long-term supporters.

Huffington Post: The "Imbecile" and "Moron" Responds: On the Freedoms of Remix Creators, 2010-Oct-15, by Lawrence Lessig

Second, I said that we needed to develop better norms to govern remix creativity. Obviously, professional filmmakers since the beginning of film have incorporated the film work of others in their film (or if not from the beginning, it would be really cool to know who was the first). But the norm that developed among filmmakers was to ask for permission first. That norm, I believe, makes no sense in the current context of remix creativity. ...

But even if permission isn't required, I do believe attribution should be. Not legally, but morally. Too often, in my view, remix creators feel that "fair use" means no obligation to be decent. I don't believe that. I believe that if someone uses someone else's work, even if the law says that use is "fair," the remix creator should acknowledge the work she remixes, by giving attribution somewhere in the work.

Why marketers who don't understand Facebook may be wasting their time

Facebook continues to confound me. If I enjoyed it more, I think I'd understand it better. Twitter made instant sense to me, even in the variety of ways it could be used. Many of my contacts demand Facebook involvement. So I trudged along into it, but this article makes me realize that I may be wasting my time on some aspects of it. I'm not spending any more serious effort there until I thoroughly read and considered the article below.

Still, we were able to observe firsthand how Facebook can elevate or bury the news you want to share with your friends. For average users, cracking the Facebook code is something of a fun puzzle. But for marketers trying to tap Facebook—or individuals who see the service as a way to promote themselves—understanding how content propagates through the system is anything but a game.

I used to work in the business of measuring customer satisfaction, mostly for auto dealerships. It quickly became a superficial game for everyone involved, but we tried to keep it real, mostly by listening carefully. Since then, 'customer experience' has become a Wikipedia entry. Every year I now attend the Good Experience Live (GEL) Conference.

Experience is an abstract concept like quality. However, it's a powerful concept for marketers if we think about the customer experience as a journey the customer makes with us. Are we being a valuable companion? 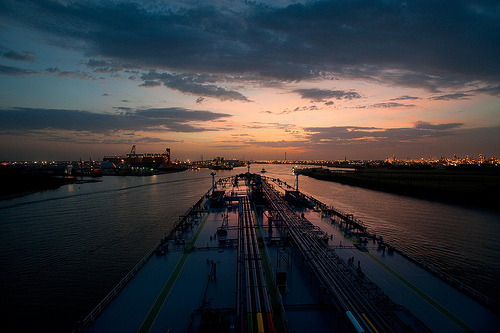 This is the last week to catch the Dignity and Impudence show of Edward Lane McCartney's work at the Goldesberry Gallery (2625 Colquitt in the Upper Kirby District). Beautiful objects with deeper meanings... This is Mea Maxima Culpa.  Cat-O-Nine Tails. Acrylic, brass, copper, steel, and glass.  52" x 5" x 5. 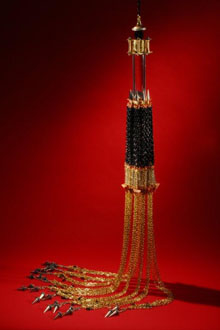 Back at my desk after rearranging priorities

The last week has been pretty chaotic for me. We have the Houston Summit coming up in two weeks, and we're pretty surprised about the way things have worked out. New teams are forming, and new supporters are popping up.

We didn't get what we expected, of course. No corporate sponsors, for instance. Lots of requests to attend for free. Everyone is curious, but cautious about getting involved. The phrase we hear most often is "Good luck with that."

We are innovators and we will roll with the punches, continuing on our merry way. We're trying to be merry, anyway!

For the last half-day, I've been struggling to produce a new invitation for our big event, the Houston Summit for the Creative Economy. And now that it's finished, it looks like it should have taken 15 minutes. You can see right away that my goal is not to create something polished, but something hard-working that will survive tough environments, like the Blackberry. Information architecture design is like that. When it works, it looks too easy. Not that I think I've mastered it, but I work at it.