I had not realized that the Millennial Generation (currently 9 to 28-years-old) is larger than the Baby Boomers. Like the Boomers they aggressively demand information and entertainment served their way and as they begin to assume jobs in significant numbers, they will be very powerful. Not to say they aren't incredibly influential now, as I know from my own two Millennials (15 and 17-years-old). Their use of social media and desire to generate their own content are causing media to evolve in unpredictable directions.

Researcher Brent Magid says no other group of consumers will have as profound an impact on the media business over the next 10 years  ... this group, which numbers 79 million, one million more than the Baby Boomers in this country, have grown up using multiple media platforms at the same time, and need to be marketed to differently than the older Boomers....Millennials consume 20 hours of media a day, but that is all done within 7 hours of clock time.

Okay, last sponsorship post for awhile, but I just spotted an interesting announcement in Downtown Happenings, the email newsletter of the Houston Downtown Management District:

In addition, the Houston Lexus dealers have donated a car being auctioned on eBay with all the proceeds going to Uniquely Houston, the Hobby Center's development program for emerging performing arts groups in Houston. 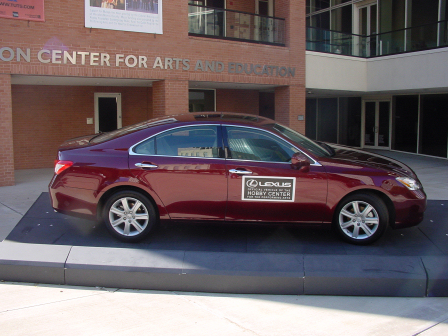 Your Houston area Lexus dealers, through the online resources of eBay and its MissionFish program, are banding together to take the lead in supporting innovative arts in the Bayou City.

Svedka Sponsors Literature on the Future

Nerve.com, the online magazine of sex, relationships and culture, has accepted a sponsorship from Svedka vodka to produce a edit and publish a series of articles on what the world of politics, sex and science will be like in 2033. Authors tapped so far include Ana Marie Cox of Wonkette fame, Jay McInerney, Rick Moody, Walter Kirn, Will Self and Joel Stein. Svedka does not request the authors to include any mention of the product or related issues. Svedka also promises a book compiled from the articles and a book tour at a future date.

"We've always gotten along well with advertisers that are related somewhat to the vices, and this whole project is about the future of misbehavior," he added. Besides, "if race-car drivers are sponsored by Shell motor oil and athletes by Nike, writers should be sponsored by liquor brands," [Nerve publisher] Mr. Griscom said. "It's a natural fit."

Most new places to advertise make me cringe. Actually, those ads printed on the floor of grocery stores startle me--I keep thinking something has spilled. Now trendwatchers at Springwise have spotted book jackets in Japan. When I was in public school, we did have advertising on our book covers from local merchants, but I don't think they were as pretty as these.

Made from high-quality, coated paper that makes designs and colours pop, Brajackets come with a built-in bookmark. They're available from stands in bookstores. Free, and no purchase necessary. New designs come out a few times a month, and the most popular ones are gone in a matter of days.

Hewlett-Packard is trying to put the "personal" back into computers. They have come up with a pretty interesting activity for college students. I think this will either take off or drop dead, and I admire them for trying it. To hedge their bets they have lots of other diversions on the web site.

"We want to reinforce the personal relationship to the PC and show consumers all the different tasks they can accomplish with an HP personal computer," Reyas says. "It's based on the notion that the PC is autobiographical...

One innovative aspect of the campaign involves MTV's college network, mtvU. A series of short, four-minute episodes on the "Meet or Delete" series follows college students as they determine if they want to meet-- based solely on the contents of their hard drives.

Phillips Norelco's Bodygroom campaign is an official success, but I find it hard to believe they spent only $500,000. However much they spent it was a very smart campaign. Accepting the idea that the product itself is pretty outrageous, they set about having fun with it. They're lucky Howard Stern talked about it, but I think that's calculated luck--a lot of advertisers send him stuff, I'm sure. This campaign demonstrates that understanding your audience, not just throwing money at it, leads to profits. And that web site made it easy for guys to refer each other without having to get personal: "Man, I'm not saying I recommend this product, but you've got to see the web site."

Talking posters at urinals in New York City bars and 13-inch rulers with the shaveeverywhere.com address helped build buzz for Bodygroom, Norelco's hair-removal device for men. At the site, a man instructs in a humorous (and racy) way about shaving male body parts. After Sirius' Howard Stern mentioned the site on the radio, more than 600 blogs were buzzing about the $39.99 Bodygroom and the website. Tribal DDB created it, and CEO Matt Freeman says that engagement is about selling. The site links to retailers and, "They have exceeded their sales goal," he says, with a campaign that cost Norelco just $500,000.

Researcher Jakob Nielsen recently released an excellent report on how email newsletters are used successfully, including ethnographic observations on how professionals relate to their inbox. Nielsen believes that good newsletters respect and support their audience, making it easier to manage information. I recommend the entire executive summary, but the bottom line was summarized in the Wall St. Journal excerpt below.

You say you like traditional newsletters emailed to customers instead of news feeds. Why so? Don't they contribute just as much to information overload?

The best newsletters really drive customer relationships. But they have to be very good, very targeted to a specific user's actual needs. And it's got to be very timely as well. For example, one newsletter is called 'Your Baby This Week,' and is targeted at new parents and, in particular, new mothers. ...people really look forward to getting that particular newsletter. Unless a newsletter is very good, people will just say, 'Oh no, more information.'

Newer Older
Theresa has been writing the QViews blog, her perspective on marketing, Houston, organizations, and innovation for fifteen years.
Subscribe to this blog's feed