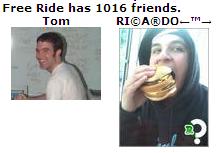 Since its parent company purchased social networking site MySpace.com, Fox is now using MySpace to promote its TV shows. On MySpace.com, attaching your name to a profile as a "friend" doesn't mean you know someone but rather that you approve of something in their profile. So MySpace has been a great place for rock bands to establish fan connections, and I would expect most TV programs would eventually want a site. It's a good way for the program to demonstrate its support and the fans can connect with each other.

Fake profiles are so common on social networking sites that hardly anyone objects, but the creativity and satisfaction of solving the mystery better be a fun pay-off, or fans may feel ripped off.

News Corp.'s Fox is using heavily trafficked MySpace.com to promote new comedy "Free Ride"--a possible preview of how it will use the online force to plug new venture My Network TV. Over a month ago, Fox seeded MySpace, a social networking site, with "profile" pages for "Free Ride" characters "Nate" and "Dove." At first, stealth marketing was used. The profiles bore no mention of the show.... viral marketers then worked to get people to visit them, interact, and hopefully return.

Now...Fox has created a special MySpace page devoted to "Free Ride" accessible through a link on the MySpace home page. That site includes a video trailer, MySpace pages for all nine show characters, and the opportunity for MySpace users to link their profiles to the site, becoming "friends" of the show.

New Ways to Interact with Commercials

When we think about interactive TV campaigns, we usually think people will see the TV commercial and then go to the web site. Now Home Depot and Cadbury Schweppes are driving audiences from the web site to see the commerical.

After watching the three [Home Depot] commercials online, users could vote for their favorite from early Saturday, Feb. 18, through late Sunday, Feb. 19. The commercial that garnered the most votes was to be chosen to appear on TV beginning today.

Home Depot was encouraged by the results: 453,700 votes were cast at the Web site. "Consumers are in control these days and want to pick and choose what they watch," said Roger Adams, senior vice president for marketing at Home Depot in Atlanta....

The Dentyne line of gum sold by Cadbury Schweppes is also seeking to involve consumers in its TV advertising with a twist on the Home Depot idea: one commercial, with three potential endings.

Will these type of activities increase brand loyalty? If they are part of an overall strong customer experience, they can.

At the end of last year, trend watcher Faith Popcorn published an article about the 'death of advertising.' Twin problems: the splintering of audiences across media and the sinking credibility of most advertising messages, have led her to recommend that companies move into sponsoring activities for their target audience.

You can buy media, but you must invest in culture. Consider Tylenol, a brand that my colleagues and I have worked with over the past few years. Executives at Tylenol wanted to improve their ability to reach 18- to 29-year-olds. So we delved into the culture of this demographic.

Recognizing that pain was frequent companion in many athletic recreational activities, Tylenol set out to connect with people who risk injury. The Tylenol Bowl skate boarding video is still accessible, although "Ouch. The Website" is being redeveloped.

Having a brand image built around a character strength is a natural advantage. Realizing that nobody doesn't admire persistance, Energizer has established the "Keep Going Hall of Fame." The annual solicitation and induction of new members is a long-lasting campaign platform.

We all know people who continually go above and beyond. People who have shown uparalleled determination and tireless spirit - ordinary people with extraordinary attitude and energy. The Energizer "Keep Going" Hall of Fame was designed as a way to celebrate these stories and to meet the people who inspire us all to keep going. Who Belongs In The Hall Of Fame? Ordinary people with extraordinary spirit, determination, and courage. They never give up. They keep going, just like the Energizer Bunny. It could be your child or parent, a student or a teacher, the mailman, a co-worker or a dear friend - anyone you feel deserves recognition for their shining example of endurance, determination and perseverance.

Don't overlook the opportunity to build community around the universal vales associated with your brand.

Marketing Australia with a Cheeky Beauty

This elegantly produced new campaign by Australia Tourism is descirbed in news stories as more shocking than it appears when you actually watch the spots. I suspect they want to produce some 'buzz' that will cause people to pay closer attention when these spots air. I find them very entertaining, and I hope this complex strategy pays off for them.

The new campaign, which can be seen on Tourism Australia's Web site (www.wherethebloodyhellareyou.com), features a series of Australian backdrops. It begins with characters saying: "We've poured you a beer and we've had the camels shampooed, we've saved you a spot on the beach ... and we've got the sharks out of the pool." A bikini-clad woman then asks: "So where the bloody hell are you?".

The "endless aisle" is being tested at Home Depot with internet kiosks that allow you to use the web site while you're in the store, or the mall or wherever. Assuming they can track the online sales rung up at any specific kiosk, we should see them testing more of these and moving them around to just the right spot for maximum usage and sales.

The plan includes company-branded kiosks where consumers can surf http://www.homedepot.com and buy goods at any time wherever they are, be that a Home Depot store, mega-mall or maybe even an airport. Such self-service kiosks are already being tested in 50 Home Depot stores and at two Georgia malls.

Why not "sponsor" a kiosk at an airport, where you get to surf for ten minutes for every 30-second ad you view? In our homes, advertising-supported internet access was unbearable, but in other places it may be just the ticket.

Chase Points out the Connection

When looking for a new place to put an ad, you'd best look for a place where the ad will be appreciated. Chase is helping people find electrical connections at the airport.

In the latest example of marketers plastering their message in unusual public spaces, an ad agency hired by Chase installed 90 two-foot-long stickers around outlets in the airport's departure lounges and eating areas earlier this month. The decals are emblazoned with Chase's name and logo with messages such as: "This outlet works. Now you can too." ...

Chase hopes the decals will be spotted by the hordes of businesspeople passing through the Indianapolis airport every week, many of whom while away hours waiting for their plane by working on a laptop computer plugged into a wall outlet.